Sterling Heights, Michigan is found in Macomb County in the suburbs of the metro Detroit area. With more than 132,000 citizens, Sterling Heights is the second largest Detroit suburb and fourth largest Michigan city. The locality is often ranked as one of the safest cities in the state of Michigan

A Brief History of Sterling Heights 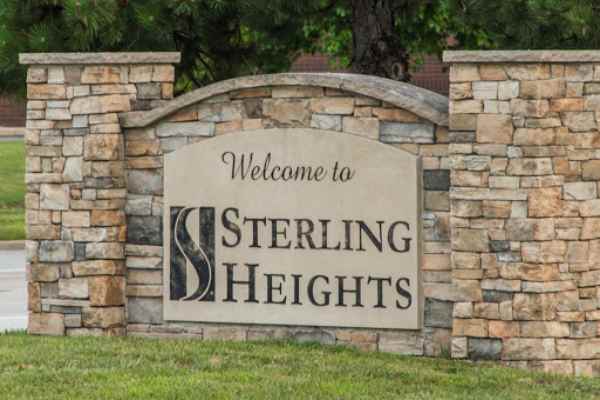 From 1836 to 1838, the Sterling Heights area was known as Jefferson Township. The name was later changed to Sterling Township and stayed this way until 1968 when it was incorporated as Sterling Heights MI. Up until the 1950s, agriculture, specifically rhubarb, served as the main industry.

Things to do in Sterling Heights MI

If you live in the Sterling Heights MI area, or are simply visiting, you’ll find plenty of entertainment and amenities. From family friendly options to historical landmarks, there is something for everyone in Sterling Heights, Michigan. Be sure to check out these options:

The Red Oaks Waterpark is a hit with kids and adults alike. This family-friendly attraction offers a wave-action pool, triple-flume waterslide, a kiddie water playground, and 990-foot long floating river. Oakland County Parks and Recreation lifeguards are on duty at all times.

The General Motors Heritage Center highlights the vehicles of the GM Heritage Collection and historic literature and artifacts documenting GM’s history. The 81,000 square foot facility features more than 165 vehicles that spotlight specific design, technical, and sales milestones of the company.

The Reptarium is home to countless species of reptiles and their habitats. You can see some of the rarest reptiles in the world, hold a snake, and wrangle gators. If reptiles scare you, they also have plenty of arachnids and amphibians to check out.

When you have water in your property, you need to act fast to minimize damages. Call ERSI for immediate water removal and extraction, drying, water damage restoration, and water damage repairs in Sterling Heights, MI. We respond 24/7, 365 to help when you need it most.

Strong storms in Sterling Heights can bring forceful winds, heavy downpours, and damaging hail. For major weather events in Sterling Heights MI that bring down a tree, look no further than ERSI. We return your property to pre-damage condition to get you back home sooner.

Mold doesn't need much to thrive in a variety of areas of your Sterling Heights property. Beyond this, a variety of severe health issues can arise, including runny eyes, difficulty breathing, sore throat, skin rashes, and even death. If you find mold, call ERSI immediately for an inspection.